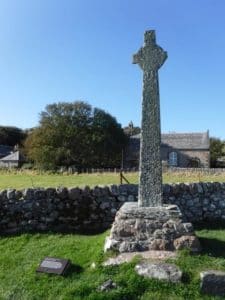 Celtic Christianity is often associated with St. Columba, the Irish monk who established a Christian mission on the tiny Isle of Iona off the coast of Scotland. History and legend tell us that he arrived on Iona on the Day of Pentecost, 563 with 12 monks. They had “sailed” from their homeland to this new place in a small boat known as a coracle, made of willow boughs and animal skins. The coracle had no sail or rudder, and they drifted on the ocean currents, stopping from time to time on other islands. When they arrived on Iona they climbed a hill and discovered they could no longer see Ireland. The hill is known as “The Hill of the looking back to Ireland”.

The high stone crosses on Iona and other places in the British Isles were often used by the Celtic Christians as gathering points for simple worship with an emphasis on the natural world, The prayers, songs and poems used in worship and in daily life were memorized and passed on in an oral tradition. After the Highland Clearances they were nearly lost. In the 1800’s, a Scottish civil servant from Edinburgh named Alexander Carmichael (1832-1912) began to record them as he interviewed people in the Highlands and on the islands. These prayers were assembled in a written collection called The Carmina Gadelica. The prayers used in our worship are taken from this collection or are written to reflect the spirit and style of those early prayers by more recent writers such as John Philip Newell, George McLeod, David Adams and others.

Since the beginning of the Christian movement, pilgrimage has been an important experience of spiritual growth. Pilgrimage was important in the Celtic tradition of Christianity in Ireland and Scotland. Celtic pilgrims understood themselves to be “guests of the world”, (in Latin Peregrine hospites mundi). Noted Celtic Christian scholar Ian Bradley observed:”If I ever had to make a film about early Irish Christianity, I would be tempted to call it ‘monks on the move’, if not ‘nuns on the run’…. For them, it was not about journeying to holy places such as Rome or Jerusalem and venerating or touching the relics of holy people; rather it was a costly form of witness involving perpetual exile from the comforts and distractions of home.”  (p.36 Pilgrimage)

In his book, The Road of Life, David Adams, former vicar of Lindisfarne (Holy Island) off the northeast coast of England says: “The Celtic saints were said to leave their homes peregrine pro Dei amore, or peregrine pro Christi amore, that is, as “pilgrims for the love of God” or “pilgrims for the love of Christ.”  This would distinguish them from those who were just wanderers, or in our terms tourists. The word peregrine means wanderers or travelers….For these early Christian travelers it was not wanderlust or the desire to see new places that made them leave their homes and monasteries, it was the call and love of God. In their journey along the road of life they sought the depth to their own existence and a closer awareness of the presence of God…..Pilgrimage is often not just a seeking of God but a response to his (God’s) call. The journey is not only to find God it is to travel in his (God’s) presence and to journey deeper into the mystery and wonder of that presence and love.” (p. 4) The experience of pilgrimage (peregrine pro Dei amore) is at the heart of Sydney Carter’s song:  “One More Step Along the World I Go”.

The Ecumenical Community of Iona was founded in 1938 by George MacLeod, a Scottish Presbyterian minister. Through the efforts of MacLeod the ancient Abbey on Iona was restored during the years of financial depression by unemployed laborers from Glasgow and also theological students. The Iona Community is a dispersed Christian Community working for peace and social justice, rebuilding of community, renewal of worship and the integrity of creation. Learn more about the work of the Iona Community of Scotland by visiting their website:  www.ionacommunity.org.uk

The vision of Minnetonka United Methodist Church is to be caring, Inclusive and Spirit-filled in all that we do.

Join us for worship

Thank you for visiting our website. We hope that you will take time to visit us in worship this Sunday.